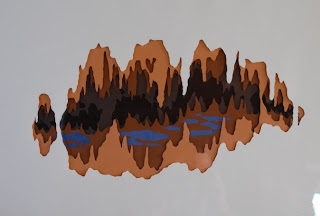 This is a small project I made with some left over Plexiglas and colored construction paper.  Although image is small, the original is 18x24 (larger image here). The Plexi is 3/8 and I ended up using 6 pieces, each with a cave cut out.  This was then stacked to give it some depth.  Unfortunately photos are static so you can't feel the depth, but I asure you it is the shiz-nile.  At least that is what I keep telling myself.

Cutting the paper was maybe an hour.  Laying and cleaning the Plexi, maybe 20 minutes.  The real problem was the frame - I had to build my own since 6 sheets of Plexi is something like 30 pounds.  Building the frame took far more time and effort than anything else, so, I probably will not be doing too many more of these.

Next time (if their is a next time), instead of construction paper, it would be much easier to cut vinyl, although would be worried of an overly plastic feel.  Also I think it would be better to not clean the Plexi, and even slightly dust it to really give the feeling of depth.  Several people have looked at the peice and did not even notice it was in solid Plexi at all, but thought it simply free-floating paper.

Anyhow, if I happen to get renewed interest I think it would be good to try a dungeon map with 4-5 levels stacked, but with enough viewable area to see all of the layers as they lower and lower.  Tricky perhaps, but something that would look excellent if it was decent executed.
Posted by Canecorpus at 7:11 PM