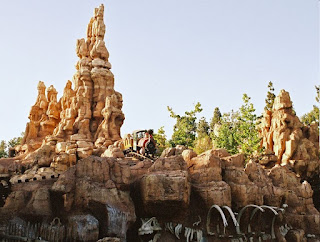 I put this together for a buddy as an interlude adventure in Night's Dark Terror.  Their is a part in B10 with Dwarven miners and a cave, but it is rather mundane, so this was written to replace it.  Simply put, this interlude is loosely modeled from Disney's Big Thunder Mountain Railroad - only with the chance for catastrophic collisions, big nasty spiders leaping on people, and goblins throwing javelins from adjacent carts ala Temple of Doom.

So, enter Thunderdelve Mines.  I admit it is a bit campy, but with the length of good solid campigning in B10, I do not see that as a bad thing.  Side note, I stole the name from an (unremarkable) model I owned as a kid, Thunderdelve Mountain.